HOUSTON, TX / ACCESSWIRE / July 7, 2020 / Viking Energy Group, Inc. (OTCQB:VKIN) ("Viking") and Camber Energy, Inc. (NYSE AMERICAN:CEI) are pleased to announce that Viking has started to re-activate certain wells within its portfolio that were purposely turned off or dialed-back due to the collapse of oil prices caused in part by the COVID-19 pandemic and certain geo-political factors.

Viking has endeavored to be as proactive as possible in terms of increasing storage capacity and lowering production rates of certain wells to avoid selling oil from certain leases at prior low prices. For example, in May, Viking, through various subsidiaries, rented approximately 44 portable storage containers to situate on certain properties to store product until commodity prices increased. Viking also reduced production rates and/or ceased producing hydrocarbons from approximately 13 wells, with a view to re-activating the wells when pricing improved.

Below is a picture taken on or about June 11th, 2020, showing temporary storage containers located on one of Viking's leases in Orange County, Texas. 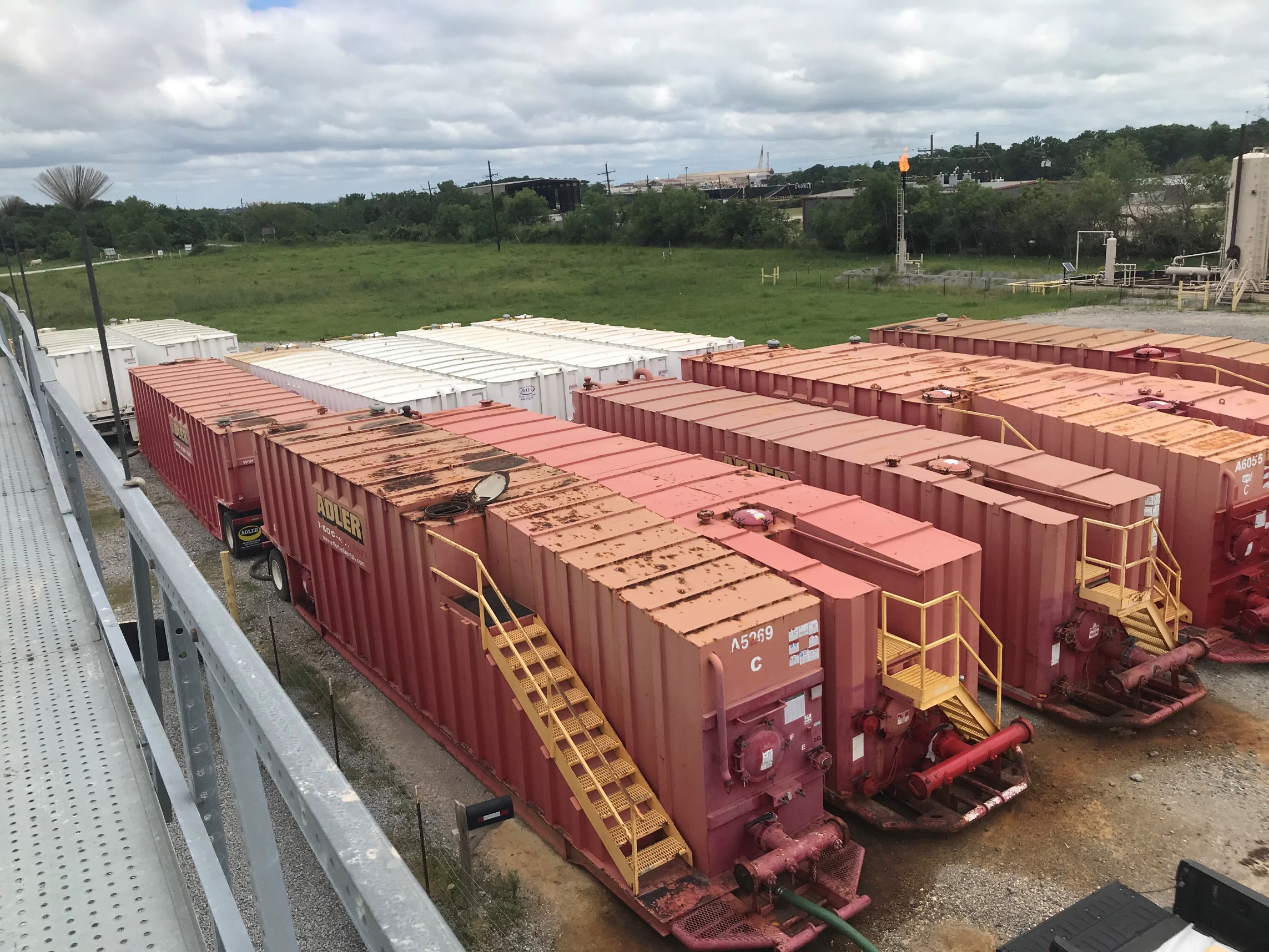 As commodity prices began to rise in June due to increased demand for oil, Viking started the process to re-activate applicable wells, including, for example, well API No. 42-361-30914, located in Orange County, Texas, owned by Viking's subsidiary, Ichor Energy, LLC ("Ichor"), which was shut-in on May 5, 2020. Production within Viking's Ichor division for the week ending June 27, 2020, was 31% higher than the week ending May 27, 2020, as a result of Viking's initial re-activation efforts. Viking has also taken steps to sell oil that has been stored on certain properties since May.

Viking estimates the entire re-activation process will be completed by the end of July, subject to commodity prices remaining at or near current levels. There are no guarantees all wells will perform at the same rates as prior to being de-activated.

James Doris, President & CEO of Viking, stated, "We're encouraged by the increase in oil prices, recognizing we have to remain as strategic and resolute as possible in a volatile market. We believe the company will be in an even better position upon completion of our planned merger with Camber Energy, Inc., as the combined company's trading on a major exchange will provide the company with further optionality and enhanced visibility."

Louis Schott, Interim Chief Executive Officer of Camber, stated, "Viking's operational experience is one of the primary reasons for the planned merger with Viking as Viking brings this expertise to the combined companies."

Details on Planned Merger between Camber and Viking

Viking is an independent exploration and production company focused on the acquisition and development of oil and natural gas properties in the Gulf Coast and Mid-Continent region. The company owns oil and gas leases in Texas, Louisiana, Mississippi and Kansas. Viking targets undervalued assets with realistic appreciation potential.

Based in Houston, Texas, Camber Energy (NYSE AMERICAN:CEI) is a growth-oriented, independent oil and gas company engaged in the development of crude oil, natural gas and natural gas liquids in Texas. For more information, please visit the company's website at www.camber.energy.

Certain of the matters discussed in this communication which are not statements of historical fact constitute forward-looking statements that involve a number of risks and uncertainties and are made pursuant to the Safe Harbor Provisions of the Private Securities Litigation Reform Act of 1995. Words such as "strategy," "expects," "continues," "plans," "anticipates," "believes," "would," "will," "estimates," "intends," "projects," "goals," "targets" and other words of similar meaning are intended to identify forward-looking statements but are not the exclusive means of identifying these statements.

Important factors that may cause actual results and outcomes to differ materially from those contained in such forward-looking statements include, without limitation, the occurrence of any event, change or other circumstances that could give rise to the parties failing to complete the merger on the terms disclosed, if at all, the right of one or both of Viking or Camber to terminate the merger agreement and the result of such termination; the outcome of any legal proceedings that may be instituted against Viking, Camber or their respective directors; the ability to obtain regulatory approvals and other consents, and meet other closing conditions to the merger on a timely basis or at all, including the risk that regulatory approvals or other consents required for the merger are not obtained on a timely basis or at all, or which are obtained subject to conditions that are not anticipated or that could adversely affect the combined company or the expected benefits of the transaction; the ability to obtain approval by Viking stockholders and Camber stockholders on the expected schedule; required closing conditions which may not be able to be met and/or consents which may not be able to be obtained; difficulties and delays in integrating Viking's and Camber's businesses; prevailing economic, market, regulatory or business conditions, or changes in such conditions, negatively affecting the parties, including, but not limited to, as a result of the recent volatility in oil and gas prices and the status of the economy (both US and global) due to the Covid-19 pandemic and actions taken to slow the spread of Covid-19; risks that the transaction disrupts Viking's or Camber's current plans and operations; failing to fully realize anticipated cost savings and other anticipated benefits of the merger when expected or at all; potential adverse reactions or changes to business relationships resulting from the announcement or completion of the merger; the ability of Camber to obtain the approval of its Series C Preferred Stock holder to close the Merger, to the extent required; the ability of Viking or Camber to retain and hire key personnel; the diversion of management's attention from ongoing business operations; uncertainty as to the long-term value of the common stock of the combined company following the merger; the continued availability of capital and financing prior to, and following, the merger; the business, economic and political conditions in the markets in which Viking and Camber operate; and the fact that Viking's and Camber's reported earnings and financial position may be adversely affected by tax and other factors.

Viking and Camber caution that the foregoing list of important factors is not complete, and they do not undertake to update any forward-looking statements that either party may make except as required by applicable law. All subsequent written and oral forward-looking statements attributable to Viking, Camber or any person acting on behalf of either party are expressly qualified in their entirety by the cautionary statements referenced above.

Additional Information and Where to Find It

In connection with the proposed merger, on June 4, 2020 Camber filed with the SEC a registration statement on Form S‑4 to register the shares of Camber's common stock to be issued in connection with the merger. The registration statement includes a preliminary joint proxy statement/prospectus which, when finalized, will be sent to the respective stockholders of Viking and Camber seeking their approval of their respective transaction-related proposals. INVESTORS AND SECURITY HOLDERS ARE URGED TO READ THE FINAL REGISTRATION STATEMENT ON FORM S-4 AND THE RELATED JOINT PROXY STATEMENT/PROSPECTUS INCLUDED WITHIN THE REGISTRATION STATEMENT ON FORM S‑4, AS WELL AS ANY AMENDMENTS OR SUPPLEMENTS TO THOSE DOCUMENTS AND ANY OTHER RELEVANT DOCUMENTS FILED OR TO BE FILED WITH THE SEC IN CONNECTION WITH THE PROPOSED MERGER, WHEN THEY BECOME AVAILABLE, BECAUSE THEY WILL CONTAIN IMPORTANT INFORMATION ABOUT VIKING, CAMBER AND THE PROPOSED MERGER.

Participants in the Solicitation

No Offer or Solicitation

This communication shall not constitute an offer to sell or the solicitation of an offer to buy any securities, nor shall there be any sale of securities, in any jurisdiction in which such offer, solicitation or sale would be unlawful prior to registration or qualification under the securities laws of any such jurisdiction. No offering of securities shall be made except by means of a prospectus meeting the requirements of Section 10 of the Securities Act of 1933, as amended.